The mission of Lino blockchain is to facilitate a Value-sharing Content Economy where content creators, viewers, and all other contributors are fully and fairly incentivized to maximize long-term economic growth in a sustainable way.

LINO is a non-refundable functional utility token which will be used as the fundamental medium of exchange between participants on the Lino blockchain. The goal of introducing LINO is to provide a convenient and secure mode of payment and settlement between participants who interact within the ecosystem on the Lino blockchain, and it is not, and not intended to be, a medium of exchange accepted by the public (or a section of the public) as payment for goods or services or for the discharge of a debt.

LINO would also function as the economic incentives which will be consumed to encourage participants to contribute and maintain the Lino blockchain ecosystem. Users of the Lino blockchain and/or holders of LINO which did not actively participate will not receive any LINO incentives. They would be distributed to reward all ecosystem contributors with LINO, such as validators (for providing computing resources to produce blocks and validate transactions), content creators (for producing and publishing original content, including videos and live streams), App developers (for developing applications on the network) and Voters (for participating in voting and governance). LINO is an integral and indispensable part of the Lino blockchain, because without LINO, there would be no incentive for users to expend resources to participate in activities or provide services for the benefit of the entire ecosystem on the Lino blockchain.

Leveraging the token-incentivized NDN, viewers can utilize their idle network bandwidth and computing resources to provide infrastructure to Lino blockchain while earning LINO as rewards at the same time. In other words, viewers will be able to earn while watching on Lino Apps.

Apps utilizing the Lino blockchain do not take any cuts from direct payments between viewers and content creators. 90.1% of any consumption(donation, paid subscription, and etc) will directly go to content creators, while the rest 9.9% will reward LINO Stake holders for voting.

An App developer on Lino blockchain can issue its own fixed price IDA that can be used within that app only. Developers would be required to stake an amount of LINO before being entitled to develop applications. IDA, for the first time, makes blockchain-based applications more user-friendly to non-crypto users.

LINO Stake holders vote on validator election as well as governance proposals, and receive Voting Rewards in return. The Voting Rewards come from 9.9% of all consumptions on Lino blockchain.

Lino blockchain is based on the Byzantine Fault Tolerance(BFT) based Proof-of-Stake(PoS) consensus algorithm, particularly the open source projects Tendermint and Cosmos. 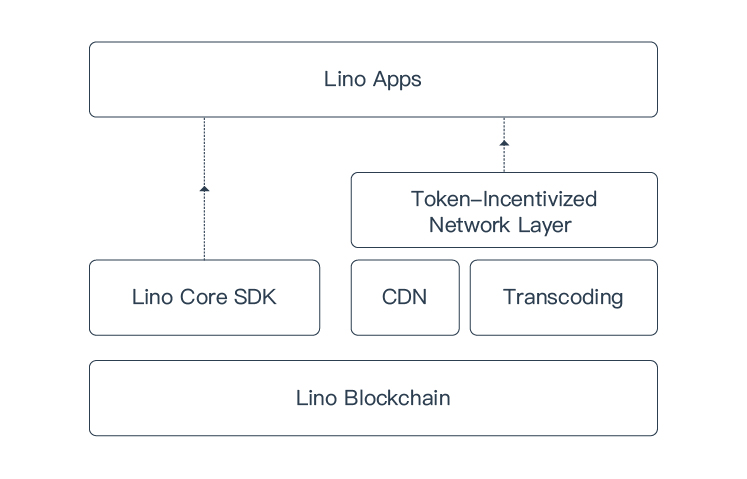